Do I Have To Remove My Wisdom Teeth?

A patient reported that he had his wisdom teeth removed in the 70s and suffered a numb chin for 6 months. He asks if removing wisdom teeth is necessary.

Removing wisdom teeth makes sense if there is not enough room for them and if they are in not in the proper in position. If wisdom teeth need to be removed, it is best to remove them during teen years before their roots develop.

Techniques for removing wisdom teeth have improved substantially. Cone beam x-rays give the dentist a full view of the tooth. He can plan and execute his procedure more precisely. He is able to get the job done with the least stress to the patient and minimize the risk of nerve damage.

Dynamic oral surgery is another technique. A camera records and displays on a monitor every action the dentist performs. No more flying blind, hammer, chisel and mallet surgery they used back in the day.

Gum recession can make you look older - long in the tooth. Too much gum showing and an uneven gum line can also mar your smile.

Your gum tissue coves the root of the tooth and protects the bone. It forms a seal below the gum line to prevent decay and bacteria from entering your system.

The standard approach to treat gum recession uses tissue from the roof of your mouth and transplants it to the receded gum.

If only a few teeth are affected, this approach works well. If a lot of gum tissue needs repair, cadaver gum tissue graphs are used.

A newer approach called the Chao or Pinhole technique is less invasive. In a procedure similar to arthroscopic orthopedic surgery, the receded gums are pulled down through pinhole incisions...

Can My Smile Make Me Look Younger?

As we age, changes in our teeth can affect our smile, making us look older.

Reasons Why Our Teeth Can Make Us Look Older

One reason why our teeth make us look older as we get older is that our teeth may actually be shorter due to wear.

Finally, our teeth may become crowded due to their tendency to move forward as we age.

Ways Our Smile Can Make Us Look Younger

One of the fastest ways our smile can make us look younger is to whiten our teeth. Whiter teeth are associated with youth.

If our teeth are quite nice, bleaching them is quick and has an immediate impact. Our patients are quite pleased with their whiter, brighter, more youthful smiles.

If our teeth are worn down, veneers and crowns may be a perfect solution.

What To Ask Your Dentist

Be sure to ask your dentist these four questions.

How often should I visit my dentist?

The answer depends on a patient's health, both general and dental. For a person without problems, dental visits twice per year are sufficient to catch changes that need special handling.

For a patient with a lot of restorations, especially those repairs ten plus years old, dental visits three times per year are suggested. With older repairs, changes such as more tooth exposure around them benefit from more frequent monitoring.

Am I grinding my teeth?

If you grind your teeth, you may notice flat spots or shiny surfaces on your teeth. The top edges of your front teeth may be worn down.

In some cases, notched areas at the gum line occur from the force of grinding. To protect your teeth, your dentist can make you a tooth guard to prevent further damage.

Do you check for oral cancers?

Topical pain relief prevents pain. For patients with dental fears and anxiety there are three other choices.

Want your dental appointment to be a laughing matter? We offer laughing gas (nitrous oxide) which you inhale.

It produces feelings of euphoria, relaxation and calmness. And yes, even fits of giggles and laughter.

Laughing gas is fast to administer and fast to wear off. No Uber needed for this dental visit!

Muscle relaxers (Valium) and anti anxiety medications (such as Halcion or Ativan) can be administered in pill form to deal with fears and anxiety. They must be taken before the appointment and take some time to wear off after.

These medications relax you. But they can also cause you to be drowsy. You will want to bring your chauffeur along if using them.

Some patients just want you to wake...

How Safe Are Dental X-Rays?

There is always a benefit / risk trade off to using x-rays for dental diagnosis. The benefits of x-rays are that they

Sounds like a lot! Actually, full mouth digital x-rays are about the same radiation exposure as a cross country round trip by air. We are all exposed to radiation daily. Live in a stone house, eat a banana? Yep, they radiate.

The chart below shows relative radiation from these sources. If you would like the full chart, request it in the blue Questions / Comments box - find it up and right. 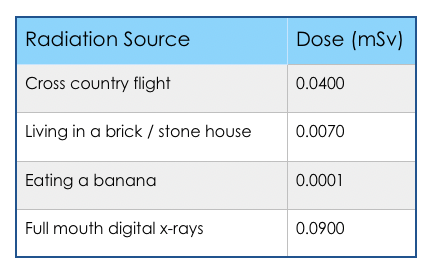 Before scheduling x-rays, we do take into account a patient's radiation history. For example, cancer radiation. We also...

Oh No! I Need A Root Canal!

It is hard to argue with its serious benefits:

What Is A Root Canal?

When a tooth's nerve deteriorates, it leaves dead nerve tissue behind.

A root canal is a procedure that removes the damaged tissue, cleans out the tooth's canals, treats them, then fills them. With today's modern tools and procedures, root canal treatment is safe and effective.

It is no longer a big deal to save a tooth.

Not Everybody Agrees That Root Canals Are Safe

Back in the 1920s, Westin A. Price supported the focal infection theory. He claimed that root canals create hidden infections that spread toxins throughout the body.

Only, there was never supporting evidence. Some call Price the "patron...

The Docs Celebrate with Jennifer Giannini

25 Years with the Practice!

Jen is a Registered Dental Hygienist / Periodontal Co-Therapist with Smiles International. When Gary asks her what makes her happiest, she says that's easy, her patients. 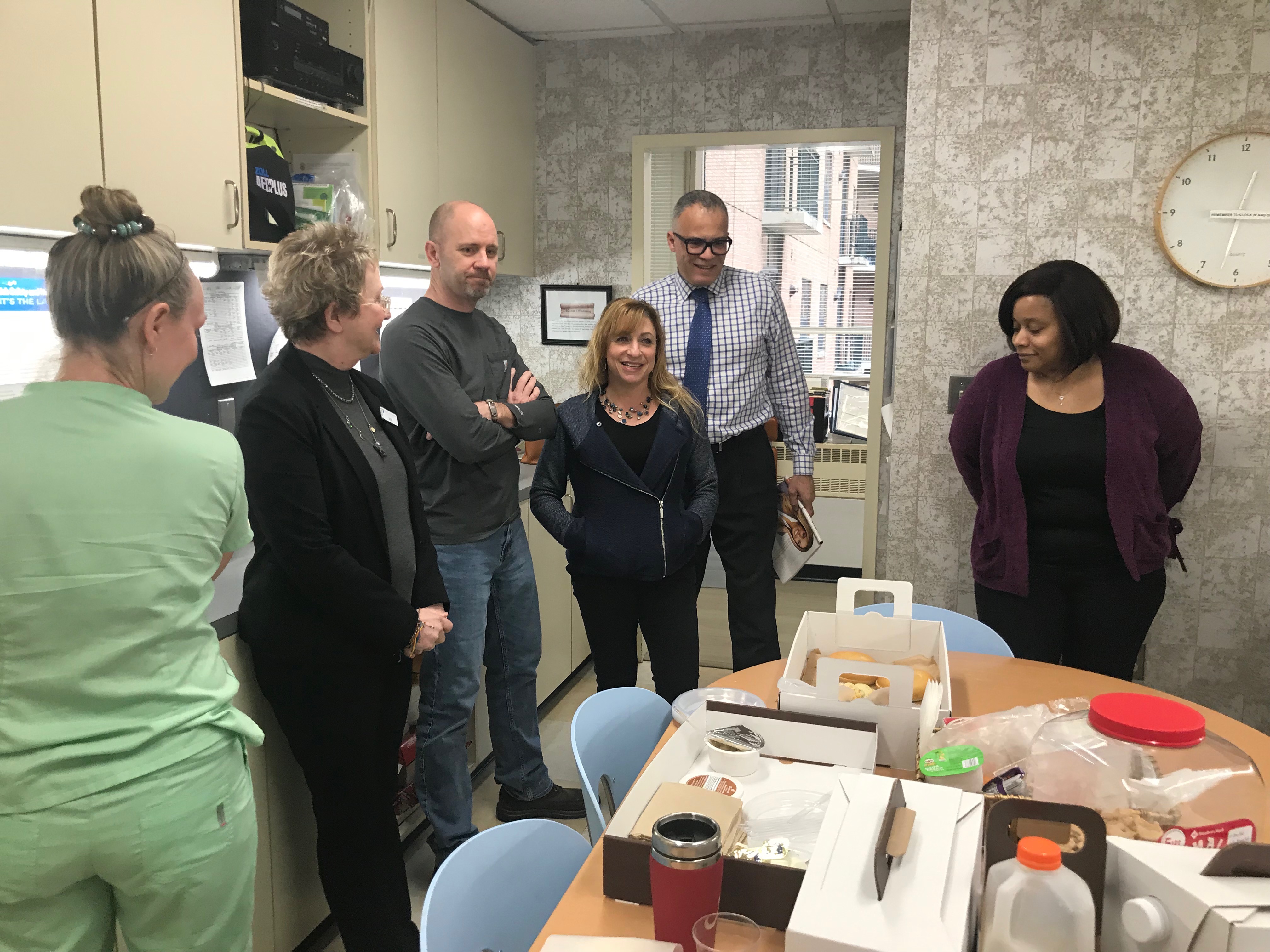 The Team Celebrates With Jen

That makes 3 families for Jen. She and her husband Carmen have 2 boys, Dominick 20 and Nick 17. They met in college and have been together for 29 years.

Both Jen and her husband love sports. Jen is a soccer champion. She gives soccer mom a new meaning. She even competes on a national level.

Husband Carmen coaches youth baseball for travel league. He also serves on the Chantilly Youth Association Board as fields and grounds supervisor.

They have 2 dogs, Lucky and Fenway - yup, after Fenway Park.

Jen is a cancer survivor, cancer free for 19 years.

Beginning in 2003, Gary and his family spent their vacations doing missionary dentistry under the sponsorship of the Future of Nicaragua Foundation.

On their first mission Gary, Shelly and their kids, then ages 4 - 9, visited the village of Jinotega in the coffee region near Managua. On this mission, Gary and Shelly worked on adults.

As soda there was cheaper than water, they found much decay. Treatment was mostly pulling teeth, not saving them.

When they visited the same village the next year, there were dental chairs and some equipment. Gary was able to do fillings as well as extractions.

Decay was still rampant. He asked his patient which side he liked to chew on. He would then repair two salvageable back teeth to provide some ability to chew food.

On another trip, the family visited Ometepe Island on Lake...

Keep up with the Docs?

Want to see the Docs?

Thank You! We Received Your Subscription Request.

Where Shall We Send It?

We will send blog posts to the contact information you provide. As always, you may cancel this request at any time.